SWCD was established by the Board of Trustees of the Howard County Junior College District (HCJCD) on November 6, 1979, following completion of a feasibility study conducted by Howard College with the financial support of the Texas Education Agency. The study indicated a significant need for a post-secondary institution to provide higher education and career training for the deaf. The first classes at SWCD were offered in 1980; and on May 14, 1981, the Governor of Texas signed into law the bill (Chapter 131, VTCA, Education Code) which established SWCD as a state-supported institution within the Howard County Junior College District. 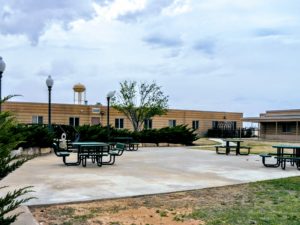 Thanks to Dr. Douglas J.N. Burke, the first Executive Director of SWCD, we celebrated over 25 years of accomplishment during this special weekend. Beginning almost two years prior to the official dedication of SWCD, Dr. Burke had a dream to establish a self-contained postsecondary program for Deaf students who may not have been or were not prepared to enroll at Gallaudet College or the National Technical Institute for the Deaf.

Dr. Burke, the Regional Superintendent for the West Texas Panhandle-Regional Day School programs for the Deaf in Texas, received word from Mr. Keith Dial, Director of Special Education in Odessa and Director of the Odessa-Midland Regional Day School Program for the Deaf, that one of the parents, Mr. Fred Maddux, had a deaf son in his elementary school. Mr. Maddux wondered if the recently-closed Webb Air Force Base facilities could be used by Odessa for a vocational program for their students. For several reasons, the facilities were not used for the high school program in Odessa. It was also determined that a regional or statewide vocational program would not be created for these facilities.

After some consideration, Dr. Burke began thinking about alternative uses for the Webb Air Force Base facilities. Dr. Burke considered setting up a college program under the supervision of the Texas Education Agency (TEA). TEA pulled together diagrams of the air base campus and facilities. At this same time the Federal Bureau of Prisons was also contemplating taking over the air base facilities. Dr. Burke then proceeded to contact Big Spring leaders to see if they would communicate with Congressman Charles Stenholm about the need for a college for the deaf.

Dr. Burke then proceeded to talk with TEA personnel. Dr. Burke called upon deaf leaders to support the college concept. Mr. Ruben Schaeffer, father of a deaf son, Mr. Jerry Hassell, a leader in the deaf community, Mr. Maddux and several others got involved. Some leaders supported the concept while others opposed it. TEA became more involved through Mr. Gary Curtis’ office, Division of Services for the Deaf. A meeting between Big Spring city leaders and then Commissioner of Education, Dr. Brockett was held. A meeting with TEA then took place. Because the Texas Legislature was about to adjourn, it appeared questionable whether this project could take place. TEA also had no legal jurisdiction to establish a college. It appeared future considerations for this project would have to be delayed for two years. Big Spring community leader Mr. Clyde McMahon then asked if the “new college” could be sponsored by another college. Members of the Howard County Junior College District Board of Trustees were asked if they would consider sponsoring the college. A consensus from the Board of Trustees to approve this request was completed in a few short minutes. Howard College entered the picture in May of 1979 under the leadership of President Charles Hays.

A feasibility study or needs assessment for SWCD was conducted by Mary Dudley, Howard College Assistant to the President, with the financial support of the Texas Education Agency. Based on the results of the study, TEA agreed that there was a need for a college like SWCD. On November 6, 1979, the Howard County Junior College District Board of Trustees officially established the SouthWest Collegiate Institute for the Deaf.

Dr. Burke began his employment with HC in February of 1980 with funding provided by a private foundation in the Big Spring community. Dr. Burke worked diligently to design the SWCD program, the philosophy of SWCD, objectives, curriculum, and services. Staffing and budget preparations were also part of Dr. Burke’s duties. All of this work was done so as to avoid any conflicts with established state law and educational policy. Securing funding for SWCD was a major undertaking for all parties involved. Attracting students to SWCD was the next major hurdle. SWCD opened its doors to students in September of 1980. An official dedication Ceremony was held on November 7, 1980, to celebrate the accomplishments to date. On May 14, 1981, the Governor of Texas signed into law the bill (Chapter 131, VTCA, Education Code), which established SWCD as a state-supported institution within the Howard County Junior College District.

Others who contributed to the establishment of SWCD were TEA Chief Finance Officer/Commissioner Raymond Bynum, Texas Speaker of the House Billy Clayton, Lt. Governor Bill Hobby, Senator Chet Brooks, Howard College administrators Dr. Bobby Wright and Mike Bruner and college staff, the Board of Directors of TEA, Big Spring city leaders Harry Nagel, Bill Henkel, and Colonel Harry Spannaus, Big Spring deaf educator Carla Warrington and the 1980 Rotary Club of Big Spring. SWCD has continued to grow and expand services and programs thanks to numerous others who have served as administrators, faculty and staff at SWCD and within the HCJCD.

SWCD students, parents, friends and families, people from the Big Spring community and state leaders have also contributed to what SWCD is today.  Special recognition should be given to Dr. Robert C. Mehan who had a significant impact during the formative years of SWCD to bridge the gap between the deaf and hearing cultures. Dr. Mehan, as then Director of Pupil Personnel Services at the Texas School for the Deaf, first influenced SWCD with his membership on the SWCD Advisory Committee in 1982. He then joined SWCD as Dean of Instruction on October 1, 1983, moving to the main campus of Howard College during the 1984-85 academic years where he served as HC Vice-President for Instruction. During the next six years, he worked closely with the SWCD and HC administration, faculty and staff in an effort to align the communication and education efforts between the HC and SWCD campuses.

It would be almost impossible to list the names of every person who has in one way or another contributed to the success of SWCD. Most of us can recall the names of many who have helped to make SWCD what it is today. It is because of the leaders and the dedicated followers that Dr. Burke’s dream to establish SWCD continues to this day.