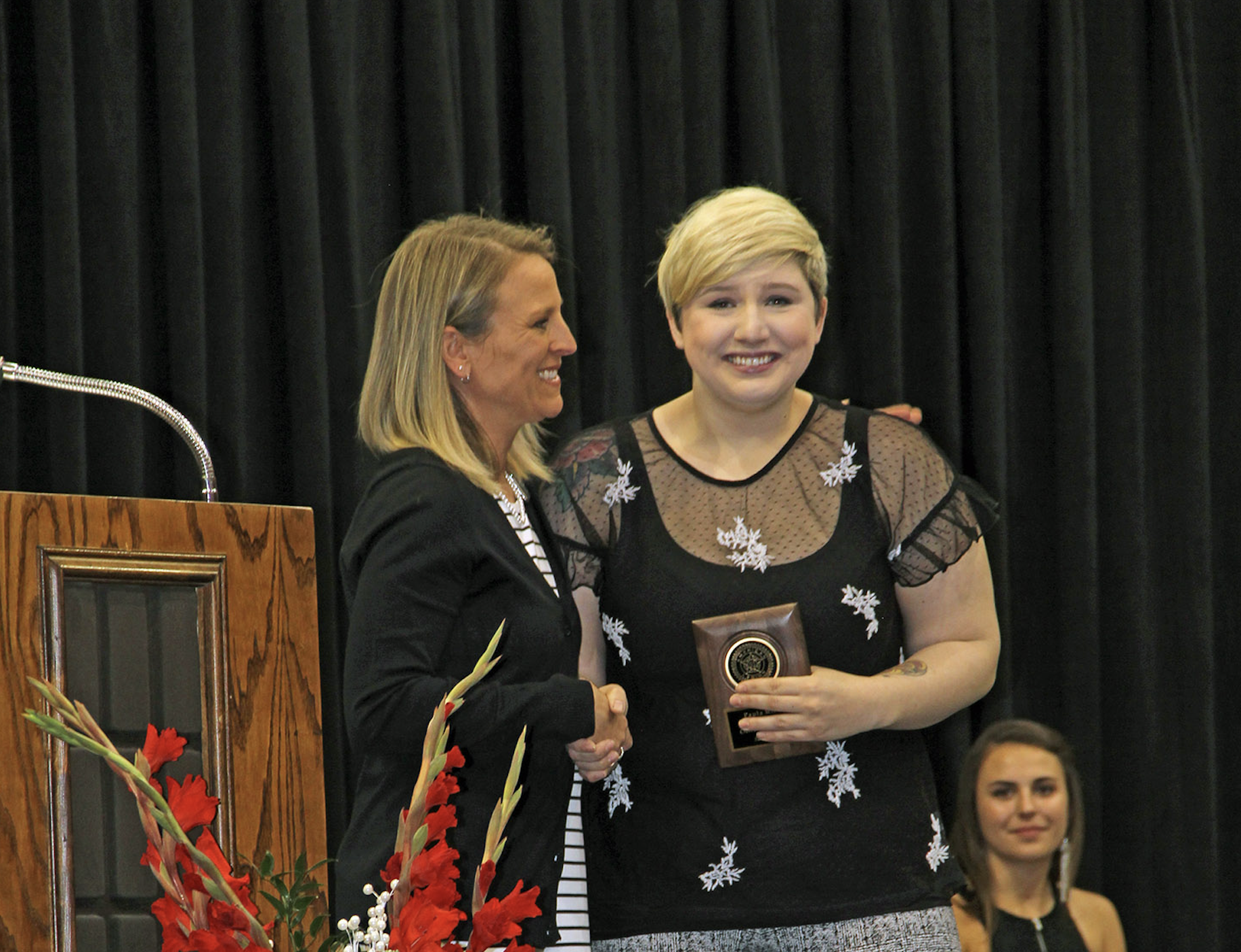 BIG SPRING – Student success was in the spotlight last night as the Big Spring campus of Howard College held their annual award convocation to celebrate student achievement and excellence.

“This is what Howard College is all about – students achieving their dreams,” said Dr. Cheryl T. Sparks, President.  “Tonight is our opportunity to recognize the students for reaching different milestones in their educational journey.”

The Outstanding Educator of the Year award is chosen by popular vote of the student body. This year’s recipient is Kirk Davidson.

Davidson came to Howard College in July 2007 to teach theater and in 2013, he transitioned into a full-time speech faculty. He is a native of Wisconsin and came to Texas to earn a bachelor’s degree from Pan American College and then his Master’s in Fine Arts from Texas Tech University.

“Mr. Davidson has high expectations of his students, but he also cares about his students,” said Kaki Simpson, Student Government Association president. “He works hard to prepare us for the future and gives us a safe platform to learn how to express ourselves.”

The Career and Technical Education (CTE) division is a very big part of Howard College and has a long-standing tradition of recognizing excellence among the CTE students.

After graduating from high school and working in various business positions and sales, Valentine realized she needed to obtain her education in order to progress in her chosen field. She is currently majoring in business with plans to transfer to a university after she completes her associate’s degree. She holds a 4.0 GPA and is a member of Phi Theta Kappa.

The American Legion Citizenship Award is presented to individuals who exhibit the most outstanding leadership, character, and citizenship qualities. The recipients can be a freshman or sophomore and selection is based on popular vote by the faculty, staff, and administration. The winners are presented a plaque and their names are placed on a plaque in the student union building.

The female recipient of the 2018-2019 American Legion Citizenship award is Paula Mills.

Mills, who is known as a remarkable and dedicated student, has been involved with the Howard College theatre department since 2007. She is active on campus and is always willing to take risks and try new things in all of her studies. While she has received accolades for her work in the arts, it is her desire to help and her genuine personality that makes her one of the finest individuals to know.

The male recipient of the 2018-2019 American Legion Citizenship award is Jeremiah Maxfield.

Jeremiah is a United States Veteran having served three tours of duty in the U.S. Army. He reached out to Howard College two years ago seeking an opportunity to play in the Hawk baseball program. Since the fall of 2017, he has brought his work ethic and dedication to the baseball team as well as the classroom and has also earned a scholarship to South Eastern University in Florida where he will continue his baseball career.

The Presidential Award for Outstanding Student of the Year is the most prestigious award given to a student of Howard College. The recipient must be a sophomore and selection is based on academic excellence, participation in student life, leadership qualities, and overall college spirit. Nominations are received from all employees.

This year the 2018-2019 Presidential Award goes to Collin Hansen.

Hansen is a computer science major who has maintained a 4.0 GPA during his time at Howard College. As he has pursued his degree, Collin has also worked as a resident assistant at the men’s dorm while participating in multiple extra-curricular activities. He has been an active member in the theatre department during his two years at Howard College and has received multiple awards for scenic design and has also joined the choir during his final year.

“It is a pleasure to bestow this award on Collin as he embodies the best of Howard College in the way that he is willing to help his fellow students,” said Sparks. “He wants everyone to have the success he has had, and we are very proud of his many accomplishments.”

Hansen was awarded a medal and a $250 scholarship.

In addition to the superlative awards handed out, Kaki Simpson and Justice Garcia were recognized for their selection to the 2019 All-State Academic Team, each receiving a $250 scholarship.